On 4th December our exciting day began with a dark and frosty start at Canterbury West station. Year 13 students Olivia, Lucy and Laura were accompanied to the prestigious Royal Society in London for a day of student-led research presentations and critique involving a wide range of school projects from all over the UK.

The Royal Society was founded in 1660 and since the 1830s has been situated in an impressive stately building just off the Mall. The building is beautiful and houses amazing artefacts including Sir Isaac Newton’s book, Principia Mathematica containing hand written notes from Newton himself!

We were welcomed by the President of the Royal Society, renowned biochemist and Nobel Prizewinner, Venki Ramakrishnan. There then followed a talk by one of my personal heroes, Professor Jim Al Khalili, who gave the Keynote address.

Students then split into four smaller groups to present their work to each other and to Fellows of the Royal Society, while teachers had a series of interesting talks from representatives of key important organisations such as IRIS, the Nuffield Foundation, CREST, the Environment Agency and Young Scientists Journal. They presented a wide range of amazing opportunities for personal development of students and inclusion of staff and schools.

The student participants came from all over the UK, including Scotland, Yorkshire, Oxfordshire and Wales. Projects were as diverse as Developing and Testing Rocket Cars (with a view to breaking the sound barrier!); Modelling Fluid Flow in Artificial Blood; Recording Sounds of Organic Molecules; testing the Response of Badgers to Distant Populations; Thermal Imaging Plants to investigate Overheating and Global Warming; and so many others, including ours on the Impact of Biodiversity on Physiological and Psychological aspects of Wellbeing.

By all accounts, our students were challenged by each other and some were grilled quite severely by the Fellows. There was so much interest in our students’ project that their question time was cut short and our students answered a wide range of challenging questions, suggestions and ideas both in that session and in the two hour showcase session that followed. They were a credit to themselves and to the school, sharing ideas, learning from others and at the same time developing their confidence in their own knowledge and understanding of their project.

Thanks to the Royal Society, IRIS, SLGGS Mrs Goodfellow, Olivia, Lucy and Laura for preparations and ensuring the day was an invaluable experience for us all. 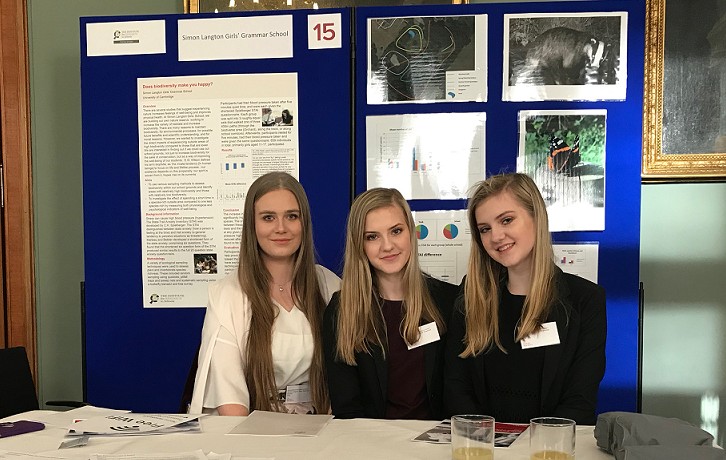