On 11th July 2019 Year 9 took part in a Human Rights Focus Day. Building on their work in RE based on the Holocaust, they heard from a Holocaust Survivor Manfred Goldberg aged 89.

Manfred delivered his compelling testimony to students about his experiences during the Holocaust.  Manfred was born on 21st April 1930 in Kassel in central Germany into an Orthodox Jewish family. He and his family suffered escalating persecution in Germany under the Nazi regime in the years before the Second World War. Manfred’s father was able to escape to Britain in August 1939, just days before the war began, but the rest of the family were unable to join him. The situation deteriorated following the outbreak of the war and in 1940 Manfred’s Jewish school was closed by the Nazi authorities.

In December 1941, Manfred, his mother and younger brother were deported by train from Germany to the Riga Ghetto in Latvia. Life in the ghetto was characterised by lack of food, use as slave labour and constant fear: throughout Manfred’s time in the ghetto, the Nazis and their Latvian collaborators regularly selected inmates of the ghetto for mass shootings in forests on the edge of the city. Despite this, Manfred was able to celebrate his Bar Mitzvah in March 1943.

In August 1943, just three months before the ghetto was finally liquidated, Manfred was sent to a nearby labour camp where he was forced to work laying railway tracks. The prisoners in the camp were treated brutally and again subjected to frequent selections. As the Red Army approached Riga, Manfred and the other surviving prisoners were evacuated to Stutthof concentration camp near Danzig (today Gdańsk in Poland) in August 1944. He spent more than eight months as a slave worker in Stutthof and its sub camps, including Stolp and Burggraben. The camp was abandoned just days before the war ended and Manfred and other prisoners were sent on a death march in appalling conditions. Manfred was finally liberated at Neustadt in Germany on 3rd May 1945.

Manfred came to Britain in September 1946 to be reunited with his father. After learning English, he managed to catch up on some of his missed education and he eventually graduated from London University with a degree in Electronics. He is married with four sons and several grandchildren.

After hearing from Manfred, students were able to ask questions, which many took the opportunity to do, these were insightful and the answers were moving.

After lunch, Rabbi Cohen from Ramsgate Jewish Community spoke about Judaism today and links with the past and how people are able to support those who are current refugees and migrants. Again, students took the opportunity to ask questions and learn more about Judaism and Rabbinical life.

In the final session of the day, connections were made between the past and current affairs and students developed their media literacy, looking at misinformation and fake news regarding human rights and immigration from both the past and the present.

Students and staff found the day highly rewarding, students wrote thank you letters to Manfred saying things such as:

“You have inspired me not to waste a single day of my life, to pursue my dreams and not to be afraid to express my opinion” - Elina

“I have been hesitant, but I planned to write a letter to our MP about the mass torture of Muslims in China, even if it’s one tiny aspect in helping to stop the persecution. Hearing you today, has encouraged me to bring this to light and raise awareness” -   Shahad

“I promise I will not stay silent if I see anything happening like this. You have done so much for future generations, thank you” - Georgia 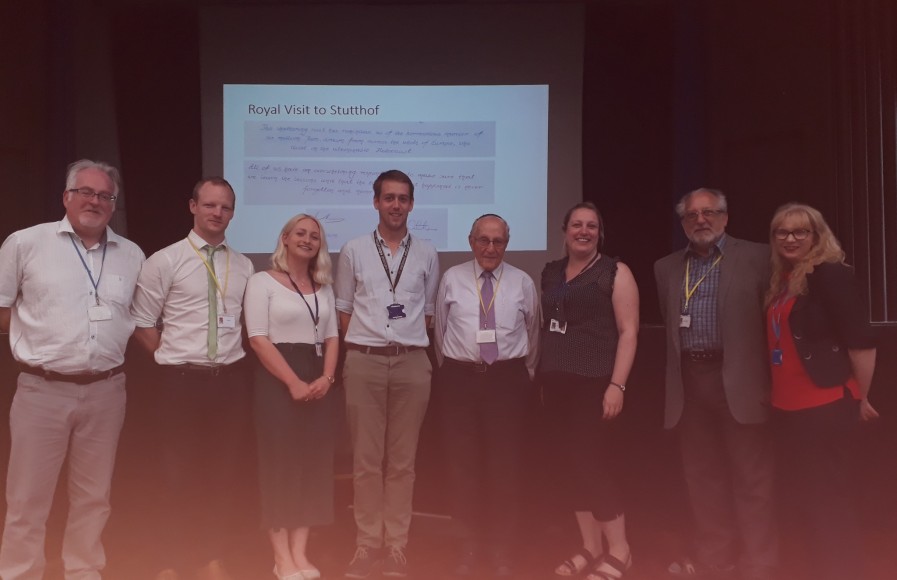