“It was an amazing experience,” It’s so different being completely surrounded by a language,” I want to go back!” These are just some of the quotes which show what a great time Simon Langton had on the 2015 French exchange.

After eagerly anticipating the exchange for months, the trip came round in the blink of the eye and suddenly we were exiting the plane after landing in Toulouse. As we neared ‘Lycee Pierre d’Aragon’, where we were to meet the French people we had been messaging for months, both the excitement and fear built up. When we finally arrived at the school I had my first taste of French culture when Jeanne, my exchange partner, greeted me with a kiss on each cheek which most of the English students found a bit odd at first. We all settled in very quickly though and apart from a few mistakes like calling Jeanne’s parents pretty instead of kind, my French was quite good!

As we had arrived on Friday evening we had a whole weekend ahead of us completely immersed in the French culture. The French people had planned many activities for their English counterparts, including lazer rush, bowling, shopping, skiing and even a weekend break at the beach, so no one was bored, just exhausted. Unlike England the weather was surprisingly hot throughout the duration of our stay in Toulouse, with temperatures of around 25 degrees which everyone greatly enjoyed despite most people packing jumpers instead of shorts! 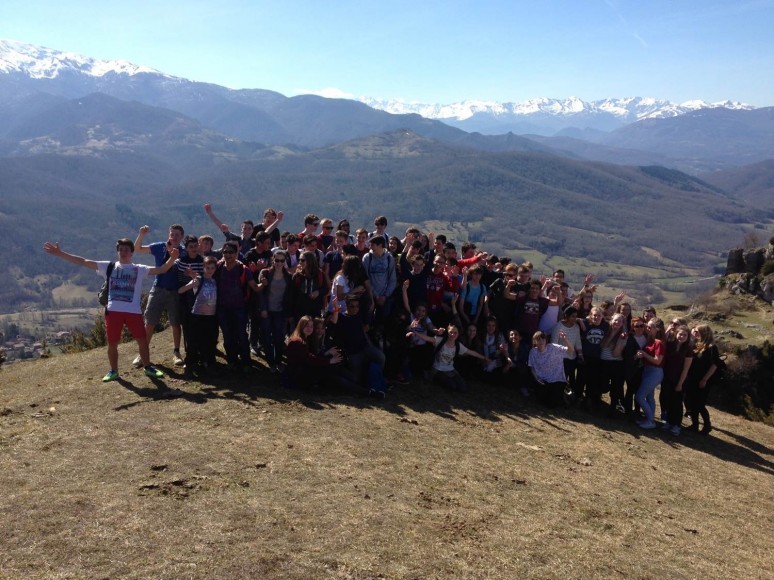 The following week flew by as we got a feel for Toulouse and the surrounding areas. Throughout the week we visited the beautiful city of Carcassonne, the airbus A-380 factory, walked up a mountain in the Pyrenees and had tours around Toulouse. And of course all of our tours were in French! On the final day we went into school with our partners to see what French schools were like, and I much prefer Langton! The Lycée was huge with around 3000 students varying in ages and looked slightly like a prison.

After saying an emotional goodbye to our French partners who we had been living with for a week, it was time to go home much to our disappointment. Not only had we made lifelong friends in France, we had also got a chance to get closer to our friends in England.

After a week’s break back in England, the French travelled to England to spend the week with us. It was quite nice to converse with our exchange partners in English, as when we were in France we went meant to speak only English! Despite the French having to accompany us to our parents evening, I think they had a good time in England and Jeanne and I have planned to meet up again in the summer holidays.

Overall, the exchange was an amazing experience and I am so happy that I decided to participate in the trip to Toulouse. I think my French has definitely improved and I have gained a better knowledge of French customs. I have also developed a love for tarte au citron!